Boppard between the Roman Empire and the Frankish Kingdom

The slow dissolution of the Roman Empire started a process which was effective to varying degrees in its regional manifestation. Administration gradually disintegrated, and security in town and country could no longer be expected.

In the longer term many towns decayed, traffic routes were no longer maintained, and general provision was no longer guaranteed. Presumably the number of inhabitants also decreased. Water pipes which sometimes brought water from far away, by means of large aqueducts, dried up. Education and culture declined, and fewer and fewer people could read and write. The intellectual horizon in general became narrower, mobility decreased. People concentrated on their own region and organised their survival.

The Franks, who had immigrated to the Roman Empire in many small groups, decades before, were able to fill the administrative gaps and take on the social positions which had become available.

Presumably the new lords in Boppard took up residence in the area around the Mühltal estuary. The St Religious Chapel, which had previously stood there, dates back to the second half of the first century, the time of the Merovingians. Thus the Franks continued to use this place where a Roman settlement had once stood.

The first mention of Boppard in a mediaeval document comes from the year 643, when the Merovingian King Sigibert III awarded Bishop Kunibert of Cologne a vineyard in Bodofricense (Boppard). Then there was a document by Emperor Louis the Pious, dating from the year 814, in which a chapel and a royal estate in Bodobrio (Boppard) were named. Therefore it can be assumed that in the time of the Carolingians there was a royal court in Boppard and, accordingly, estates. 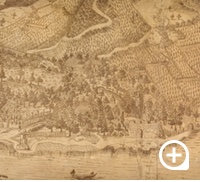 The Royal Court in Boppard

Mediaeval rule was linked to individuals. There were no governments as we know them now, with a constant seat and fixed institutions, therefore the opportunities for communication were extremely limited.

If a ruler wanted to enforce his authority and show this to his subjects, he had to be physically present. As scarcely anyone could read or write, the king was forced to come into direct contact with the common people, but also with the local and regional lords and demonstrate power. Mediaeval rulers were therefore constantly on the move, and they travelled through their territory, ruling practically from the saddle. They couldn’t always fall back on permanent accommodation.

In many places palaces and royal courts sprang up, mostly at a distance of a day’s travel. They could accommodate the ruler and his entourage for short or longer periods of time and were able to provide them with sufficient food. If this wasn’t the case, the ruler was dependent on the favour of noble lords.

A new basis for agriculture

Whilst the big landowners in the Roman Empire had slaves to manage their estates, the Franks employed farmers who managed the estates in part for their lord, and partly for themselves.

The Carolingians had at their disposal almost immeasurable property.

For a start this consisted of the Merovingian Royal estates they had taken over. There were also abandoned properties which were taken over in the event of death from the ownership of other houses and new conquests. For every ruler it was a great challenge to bring the royal estates he owned under his control and to keep them.

Each royal court or palace had extensive estates. They served the provision of the king, when he was in residence, and had to return any remaining surplus to the ruler’s household.

The royal estate was divided up under the Carolingians into administrative districts, the so-called ministeriales or fisci which were subject to an administrator, who often came from the regional or local nobility. In his agricultural policy, the capitul are de villis, Charlemagne issued detailed regulations on the administration of his estates. So for example, every royal court should have the following ready for a royal visit: beds, mattresses, feather beds, bed sheets, tablecloths, bench seats, bronze, lead, iron and wooden vessels, coal braziers, chains and all necessary utensils so ‘that it’s not necessary to acquire or borrow them from anywhere else’.
In the Carolingian period the royal treasury in Boppard was very comprehensive. The royal court at the exit of Mühltal formed the centre. The estates stretched out over both sides of the Rhine and reached as far as the Hunsrück mountains. How ownership was structured is unknown.
In addition the mediaeval sources scarcely mention what life was really like in a palace or a royal court. How many people lived there, which estates belonged to a palace or a royal court, how they were administered–– all this is unknown and can only be partially inferred.

A royal court served the purpose, in the first instance, of providing for the ruler and his court. If he announced his visit, this was not exclusively a great pleasure for the inhabitants of the region.

Depending on the size of the entourage and the length of the visit, food and drinks had to be made available, sometimes in considerable quantities. The provision of wine was not a big problem for Boppard due to the numerous vineyards by the Rhine and in the side valleys. The fact that countless rulers came here again and again bears witness to the importance and economic power of the region.

An early Christian settlement had existed in Boppard since Late Roman times. Thus the town, along with a few other places in the Middle Rhine region, is one of the oldest Christian centres in the Rhine and Lower Mosel area.

An early Christian parish church dating from the second half of the 5th century was, up until the Carolingian period, situated at the exact place where the Romans once had kept the bath of their castellum. A building subsequently erected there was apparently destroyed by the Normans at the end of the 9th century. The existence of three other chapels highlights the importance of Boppard as a Christian center in the Middle Rhine in the Carolingian period and the beginning of the East Frankish Empire.

← The Romans by the Rhine

The Kingdom of the East Franks during the Ottonian dynasty →