The Staufer in the Rhine region

From the twelfth to the thirteenth century the Staufer, a Swabian-Alsatian noble dynasty, closely related to the Salians, provided several Roman–German emperors and kings.

This period brought about, also north of the Alps, changes in terms of social circumstances, economic rise and countless innovations in agriculture. Towns blossomed again, numerous villages were created in the newly cleared countryside, and progress was made with the development of the cultivated landscape, changing the scenery of the Middle Rhine area too. The population grew as more people could be fed.
Social advancement was possible. Thus, the so-called ministeriales, originally unfree nobles, could rise to the highest positions in the service of the King, or as the entourage of territorial lords.

The Middle Rhine area, Hunsrück and Boppard all participated in these developments. A number of new villages were founded on the eastern side of the Hunsrück mountains, and Boppard was an emergent town in the Middle Rhine region which the Emperor and Kings often visited and whose population reached a certain degree of prosperity.

The Staufer increasingly concerned themselves again with securing the imperial estate in the Middle Rhine region. It was at this time that the nobility argued fiercely amongst themselves about which properties belonged to the empire and therefore would have to be given back to the empire, if the king’s position changed from one dynasty to another. Since Conrad III, the first ruler of the Staufer dynasty, the kings increasingly used the imperial court in Boppard for their visits. His successor, Frederick I Barbarossa, made an effort to maintain and strengthen again the imperial estate, which had been declining. There is evidence of the Emperor’s visit to Boppard in the spring of 1180. The imperial estate in the Middle Rhine area was used by the Staufer rulers to strengthen their position at the important confluence of the Rhine and Mosel. We can establish that what was true for the Ottonians was also the case for the Staufer: the security and defence of their position in the Middle Rhine region was of great importance for the success of their kingdom.

The rise of the ministeriales in the service of the King can be easily substantiated in Boppard. They served in the administration of the town and were also indispensable for its defence, for instance, as castle landlords of the imperial castle Sterrenberg.

This castle served the purpose of securing the Staufer imperial estate in the Rhine area, with Burg Schöneck fulfilling the same task on the Eastern Hunsrück mountain. In the twelfth and thirteenth centuries the ministeriales were proudly promoted to knights, they had their own property, and their estates in the town shaped the townscape. In the time of King Lothair III (1125–1138), the Boppard imperial treasury had the largest number of servants as far as is known compared with similar administrative districts at that time.

In the later period of the Staufer rulers and at the time of unrest during the Interregnum, large families under the ministeriales could further expand their position. Amongst the most important families were: the Beyer of Boppard, the von Schönecks, the Boos of Waldeck, the von Bickenbach, the brothers Franco and Elyas, ‘the family among the Jews’.

The Boos of Waldeck can be regarded as an example of Boppard nobility, who were successfully promoted to imperial ministeriales and also played an important role in the history of the town in later years. The house next to the Electoral Castle became property of the family in 1757. In 1977 a few remains were found of the court, which had almost completely disappeared, belonging to the Beyer family of Boppard.

Very near to the Beyerhof, on the other side the street which used to be known as Judengasse, lay Hof Bickenbach. It was probably built by the family von Bickenbach, who have been documented since 1179, and was destroyed in a town fire in July 1865.

The struggle for royal power in the Rhine area

The sudden death of Emperor Henry VI in 1197 was a difficult test for the Staufer dynasty. His possible successor as king and emperor, his son Frederick, was far too young to be recognised as king or to be able to assert his claim to the throne.

In addition, he lived far away in Sicily. In these years it was Philip of Swabia, who was crowned king in 1198, who defended the crown north of the Alps for the Staufer. He defended against Otto VI of the House of Welf, who, for his part, attempted to seize sovereignty. For years the Middle Rhine region was at the centre of the conflicts. Philipp was able to successfully retain Boppard and frequently stayed in the town, where he had to carry out important actions in his struggle for the throne. So on 8 September 1198 in Boppard he carried out the coronation of Duke Ottokar I, as the first king of Bohemia. King Otto IV was notable to stay in the imperial town in the Middle Rhine area until the autumn of 1212, and only for a short time, after Philipp was murdered in 1208.

Boppard as an Imperial City

Emperor Frederick ll, just like his son and temporary co-regent Henry VII, visited Boppard many times. By the time of Emperor Frederick II at the latest, Boppard had achieved its status as an imperial city und therefore belonged to a selected circle of towns in the empire.

Imperial cities had special rights, for they had been taken away from the rule of regional landlords and withdrawn from land rights. They were subordinated to the king alone, held market rights, but in return had to pay taxes to the sovereign and maintain their fortifications. Merchants and craftsmen settled there preferentially, and groups such as the ministeriales achieved social mobility in this environment.

Whilst in Franconian times Christian teaching pervaded general thinking in the context of all areas of life and in practising their faith, people were in a position to separate the theoretical from the religious on a secular level since the far-reaching turning point of the Investiture Controversy.

Nevertheless ‘state’ and ‘church’ were still closely linked and it was the ruler’s task, along with that of local noble families, to support churches and monasteries. Charitable foundations and donations given to church institutions were supposed to assist your salvation after death. Churches and monasteries which served as burial grounds profited particularly well from this. Furthermore you could achieve repentance by commissioning the reading of one or more masses.

During these years churches and monasteries flourished in Boppard. Many monasteries had establishments and houses within the town walls, which still partially remain today. At the same time, monasteries from elsewhere received property in Boppard, such as the land in the vicinity of the Eberbach court, which presumably came into the possession of the Cistercian Abbey in Eberbach im Rheingau at the end of the thirteenth century. 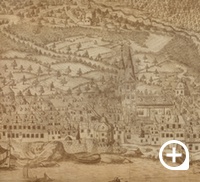 Around 1220 the building which had been commenced in the twelfth century of the nave of the parish church was provisionally completed, and from 1225 the patron saint changed from Saint Peter to Saint Severus.

The Church of Saint Severus is a Late Roman galleried basilica with no transept and with two east towers which define the Boppard townscape, due to their central location on the market place. Due to its imposing exterior, the extensive architectural design of the internal rooms, the important murals and stained glass and their colourfulness, the church is today still considered one of the most impressive major works of the Late Romantic period in the Middle Rhine region. 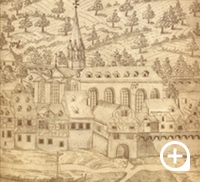 In 1262 the settlement of ‘The Brothers of Our Lady of Mount Carmel’ in Boppard was mentioned for the first time. Whilst the parish church of Saint Severus was in the centre of town, and therefore within the town walls, the Carmelites established their buildings outside the mediaeval town centre. The importance of Boppard in the Middle Ages is highlighted by the fact that the founding of the monastery in the middle Rhine area was only the third settlement of the order in the empire, after Cologne (1249) and Würzburg (1250).

The Carmelites were favoured from all sides of the Boppard nobility with numerous gifts and donations. The Carmelite church was very popular amongst the nobility and rich families as a burial place, and today there are still many noteworthy gravestones in the church. 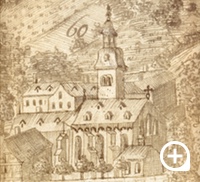 The beginnings and initial rapid growth of the Benedictine abbey Marienberg also occurred in the Staufer realm and are testament to the rich development of ecclesiastical life in Boppard at this time. Founded before the middle of thetwelfth century, the convent received royal privileges and support. Thanks to further donations by the Boppard imperial ministeriales and other citizens it became the most important cloistral settlement in the surrounding area of Boppard. Emperor Frederick II himself, at the beginning of the thirteenth century, took care of the restoration of the almost ruined building. This documents once again the interest of the Staufer royal and imperial house in the affairs of the town in the Middle Rhine area.

The Haus zur Krone dates back to donations by Emperor Otto I and Emperor Otto IIl to the diocese of Hildesheim. In 1236 the property was transferred to the Benedictine Abbey, Marienberg.

Change to the political constellation

At the end of the Staufer period the importance of the imperial estate, which the Boppard administration was able to have at its command, quite clearly decreased. This marked a change for Boppard, whose fate up until then had been very closely linked to the ruling royal and imperial house. Already in 1220 and 1232 the Staufer Emperor, who predominantly lived in Sicily and tried to rule the empire from there, had made important concessions to the Princes of the Holy Roman Empire. They gained power and influence and tried to secure estates in the Middle Rhine area.

← The Kingdom of the East Franks during the Ottonian dynasty